Ben entered the world of online marketing in 1995 when he founded a web design company from his dorm room at Texas A&M University. Since then, he has worked in various capacities in sales and marketing, from tiny start-ups to Apple Computer. In 2001, Ben founded Sprysoft, an e-commerce store that successfully sold over $5M in software online to students, teachers and schools. Ben formed SpryDev Online Marketing in 2005 to use the techniques and processes learned at Sprysoft to help other businesses sell online. SpryDev grew quickly and changed names to Volacci® in 2008. 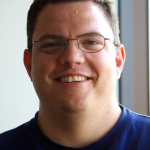